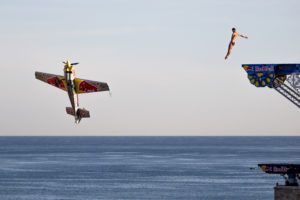 Aidan Heslop (R) of the UK dives from the 27 metre platform as Dario Costa (L) of Italy flies by during the Volare project prior to the seventh stop of the Red Bull Cliff Diving World Series in Polignano a Mare, Italy on September 14, 2022. // Romina Amato / Red Bull Content Pool // SI202209140499 // Usage for editorial use only //

Italian race and stunt pilot Dario Costa and a select group of high divers synched theirarts in a world’s-first performance on the Adriatic Coast in southern Italy as Polignano aMare gets ready to host the penultimate stop of the 2022 Red Bull Cliff Diving WorldSeries this weekend.
Early risers in picturesque Polignano a Mare in Apulia were treated to a unique aerialacrobatics’ achievement this Wednesday morning when world class cliff divers Alessandro DeRose (ITA), Aidan Heslop (GBR), Catalin Preda (ROU) and independent athlete Artem Silchenkomet mid-air with the Italian stunt pilot.
In a precisely orchestrated operation, Costa, who wrote a new chapter in aviation history withhis tunnel pass flight near Istanbul a year ago, steered his Zivko Edge 540 race plane along therocky coastline at 350km/h. At the same time, the first high diver stood on the edge of the 27-metre platform mounted on a private rooftop terrace to await the approach of the plane.
3, 2, 1, go – as soon as the high diver hears the plane getting closer from the north-east, he liftsfrom the platform in a flying position to resemble/mirror/match the contour of the plane.
From take-off to entry in the water it’s less than three seconds, and while the diver fliestowards the water in excess of 85km/h, the pilot pulls his plane up from only a fewcentimetres above the water to return to its flight route over the Adriatic Sea.
“It was really special! Again, it’s an honour to be part of this project because it’s the first timewe do something like that. Actually, we put together two sports that are completely differentand really similar because they are both mentally challenging and so it’s quite a uniqueproject,” said local hero Alessandro De Rose. “I really enjoyed the fly, the dive and the view.”
As the time span to capture both disciplines on one image was only a few seconds, fourathletes were positioned on the platform to secure the success of the ‘Volare’ project.
The aircraft took three minutes to turn around and make another approach and every round,a diver aesthetically leapt into the air to perform an extraordinary aerial ballet while theresidents of Polignano a Mare were just about to wake up.
“You rarely get the chance to have high dives for breakfast. But this morning, that’s what wehad served and that’s what we served also. It’s been mind-blowing having Dario as one of thesharpest out there to just fly by our side and really collaborate to get something so unique outhere in Polignano, which is as well a unique place and always good to come back to,” explainedCatalin Preda, World Series leader from Romania.
“The timing and coordination between all parties involved was the biggest challenge. In termsof the potentially disturbing elements that the plane and the whole dynamic of the project wasbringing to the table, all of us involved managed to separate those and really focus on whatwe needed to do to get the best outcome possible.”
Precision and communication were key to the success of the project, so it took a team ofprofessionals to coordinate pilots, divers, cameramen, photographers and security on landand in the water to pull off this world-class aerobatic display.
“This was a magic project in a magic location and such an incredible honour to be sharing itwith such an amazing group of elite divers and people working hard behind the scenes whohelped to put this into reality and last, but not least, the biggest thank you to Polignano,”stated Dario Costa. “From a flying point of view the challenges were multiple and this is quiteclear, but on top of them we had to please the photographers being perfectly in synchro andthis was something never done with an airplane and a diver, and we had to do everythingfrom zero and this was the biggest question mark of this project. I really hope we managed tohonour the memory of Maestro Domenico Modugno.”
Exceptional aerial awareness, blistering top speeds in harmony with physical force and mentalmastery combine both sports and no better place to show this impressively than thebirthplace of Domenico Modugno, writer and interpreter of the world-famous refrain ‘Volare’,which means ‘to fly’.
Following the successful synching of two different disciplines, the world elite of cliff divingcontinues the flying spectacle during the Red Bull Cliff Diving World Series competition thisweekend. 24 women and men, including the current leaders Rhiannan Iffland from Australiaand Romanian Catalin Preda, will display their diving skills in the sport’s European home in an
attempt to impress the fans and collect crucial championships points.
Wildcards (women, men): Meili Carpenter (USA), Elisa Cosetti (ITA), Aimee Harrison (CAN), IrisSchmidbauer (GER); Andrea Barnaba (ITA), James Lichtenstein (USA), Miguel Garcia (COL),Sergio Guzman (MEX), Artem Silchenko (IAT).