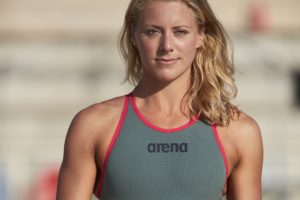 arena is pleased to announce the renewal of its partnership with Dutch backstroke swimmer, Kira Toussaint. The 27-year-old 2020 European 50m backstroke champion and 2021 European short course champion in all three individual backstroke events is now contracted with the Italian waterwear brand through 2024, including the Summer Olympics in Paris.

“I’m extremely honoured and excited to extend my partnership with Arena to 2024,” said Kira. “It’s such a professional company and the staff are great to work with, it’s not without reason Arena has been a leading brand in the world of swimming for decades. I believe they have the best equipment and I really do feel faster in their racing suits. I’m really excited for what the coming years may bring, so let’s go for it!”

The daughter of 1984 Olympic 200m backstroke champion, Jolanda de Rover, Kira swam in her first major international event, the 2012 European Short Course Championships in Chartres, where she broke the Dutch national 100m backstroke record with a time of 57.16, finishing fourth in the final. From 2013-2017 she trained in the US, first for Florida Gulf Coast University (2013-2015) and then the University of Tennessee (2015-2017), where she became the first woman in the university’s history to compete at the Olympics – in Rio 2016 – while still being an active member of the swimming programme.

Kira won her first international medals at the 2017 European SC Championships in Copenhagen, where she set a new Dutch 100m backstroke record of 56.21 in coming second, and was part of two gold-medal relays: the 4x50m mixed medley and women’s 4x50m freestyle.

At the 2018 Euro Championships in Glasgow, Kira once again was part of medal-winning relays, as the women’s 4x50m freestyle and 4x50m mixed freestyle teams both claimed silver. Back in Glasgow a year later for the European SC Championships, she won her first major individual titles with her 50m and 100m backstroke victories, along with the 200m backstroke bronze and relay gold and silver medals. Despite there being only a few competitions in 2020 due to the pandemic , she found time to break the world SC 50m backstroke record, first setting a new mark of 25.60 at Budapest’s ISL semi-final November, and then matching it a month later at the Amsterdam Christmas Meet.

Kira’s first major long course individual gold came at Budapest’s postponed 2020 European Championships with the 50m backstroke title, then at Tokyo’s postponed 2020 Olympics, she made the 100m backstroke final, finishing seventh. The year finished off with a busy final quarter, starting with October’s FINA Swimming World Cup, where she won an incredible 11 out 12 individual backstroke gold medals across the four meets, and finished second on the World Cup standings. A month later at the Euro SC Championships in Kazan, she swept all 3 backstroke events, and was part of the Dutch world record-setting 4x50m mixed medley team with a time of 1:36.18. The mixed medley relay team triumphed once again at Abu Dhabi’s World SC Championships in December, this time in a championship record time of 1:36.20, with Kira also winning three more relay medals.

2022 started off for Kira in Flagstaff, Arizona, where the Dutch High-Performance team held a high-altitude training camp in preparation for the year, which includes August’s European LC Championships in Rome.