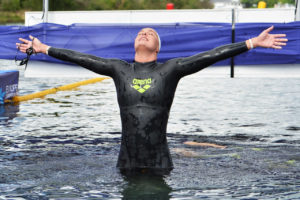 arena is pleased to announce the renewal of its partnership with Dutch open water swimmer, Sharon Van Rouwendaal. The 28-year-old 2016 Olympic open water champion and 2020 runner-up is now contracted with the Italian waterwear brand through 2024, including the Summer Olympics in Paris.

“I’m super happy and excited to continue my partnership with arena,” said Sharon. “I feel honored to have the best swimming gear, but even more honored to be a part of this family for more than 7 years. I’m looking forward to creating more beautiful memories together in the years to come.”

The undoubted crowning achievement of Sharon’s career was her 10km Olympic title in Rio de Janeiro at the 2016 Olympics, where she dominated the race, winning by over 17 seconds.

Her performance was doubly impressive as open water racing was relatively new to her; she won her first international medals in the discipline at the 2014 European Championships in Berlin, where she won two golds (10km and 5km team) and a silver (5km). Her switch to open water proved to be an inspired one: she was named European Open Water Swimmer of the Year in her first full season, and proceeded to go from strength to strength: 2 silver medals at Kazan’s World Championships in 2015 (10km, 5km team), bronze at the 2016 European Open Water Championships (5km), the 2016 Olympic triumph, silver at the Budapest’s 2017 World Championships (25km), and then the 5km-10km double gold at both the 2018 and 2020 European Championships in Glasgow and Budapest respectively.

Five years after her victory in Rio, at the postponed Tokyo Olympics held in 2021, she narrowly missed defending her title by less than a second, as the extremely warm conditions turned the race into a test of endurance and tactics. It was the first time a woman had medalled in open water at two consecutive Olympics.

It’s an impressive CV of remarkable versatility at the highest level which, as Sharon has acknowledged in the past, takes work: “I always realized that having talent is one thing, but winning is not only about swimming. It is a complete lifestyle, full focus and dedication.”