ATHLETE: FLORENT MANAUDOU
PHOTOGRAPHER-MINE KASAPOGLU
IMAGE USE: SOCIAL MEDIA ONLY, GIVEN FOR FREE ON THE BASIS WE CREDIT MINE FOR USE @minekasapoglu

arena is pleased to announce the renewal of its partnership with 4-time Olympic medallist and 4-time World champion, Florent Manaudou. The 31-year-old Frenchman’s new contract runs through 2024 and includes the Summer Olympics in Paris. 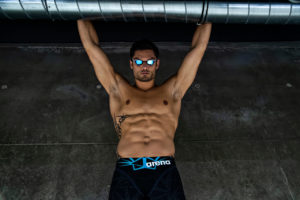 “The technical equipment supplier is a crucial partner for a swimmer’s performance,” said Florent. “I am very happy with the renewed confidence of ARENA which will accompany me until the Olympic Games in Paris in 2024. This historical equipment supplier of world swimming gives me the necessary assets and the listening skills to obtain more successes and medals during these next years. Thank you.”

Having started swimming seriously at the age of 13, it took Florent some time to win his first major international title, but it was a big one: the 2012 Olympic 50 freestyle in London. Swimming as an outsider in lane 7, he was the first Frenchman to win an Olympic title in the event, and he did so with the then-fastest time in history in a textile suit (21.34).

Florent then took a 3-year break from swimming to pursue his passion for handball, returning to the pool in 2019 with some impressive results. Despite not medaling at the 2020 European Championships in Budapest, he qualified for the postponed 2020 Olympics in Tokyo, where he won his third consecutive Olympic medal in 50 freestyle – a silver – in 21.55.

Now a veteran at the age of 31, Florent has shown he still has what it takes at the highest level of the sport, and arena is thrilled to be partnering with him as he targets his home Olympics in 2024.