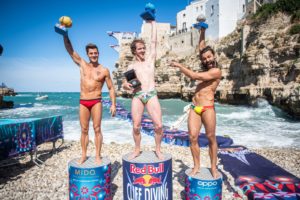 Iffland, who arrived in Italy on the back of 11 straight victories across three seasons, knew that a top five finish in Puglia would be enough to seal the deal, and there were no signs of the Australian taking her foot off the pedal as she edged past Canada’s Jessica Macaulay to take the victory and her fifth King Kahekili Trophy. Joining Iffland and Macaulay on the podium in third place was another Canadian, wildcard Molly Carlson, who continued her impressive debut season with another accomplished performance from the 21m platform.

In the men’s competition, Hunt had declared earlier in the week that he was determined to wrap things up at this stop, and the Frenchman duly delivered another victory to secure his ninth King Kahekili Trophy in 12 seasons. Hunt was joined on the podium by his closest rivals this season, Romanians Constantin Popovici and Catalin Preda who finished in second and third place respectively from almost three times the Olympic platform height.

The cliff diving elite will now remain in Polignano a Mare for the season’s grand finale this coming weekend. The titles may have been decided, but there is plenty still to play for as the fight for qualification to the 2022 World Series continues at the home of European cliff diving.